Help is Just a Block Away

The Forsyth Dental Infirmary for Children

Throughout the latter half of the nineteenth century, Boston became a leader in the professionalization and innovation of dental practice. In 1864, twelve dentists founded the Massachusetts Dental Society, an organization that crystallized expectations for the practice and study of oral healthcare. Within only a few years, two programs—Harvard and the Boston Dental College (later, TUSDM)—began training dental students. Two decades later, the first commercial dental laboratory, operated by W.H. Stowe, opened on Tremont Street, just down the road from the Boston Dental College. That same year, in 1887, Massachusetts passed a law requiring new dentists to complete a standardized board examination. 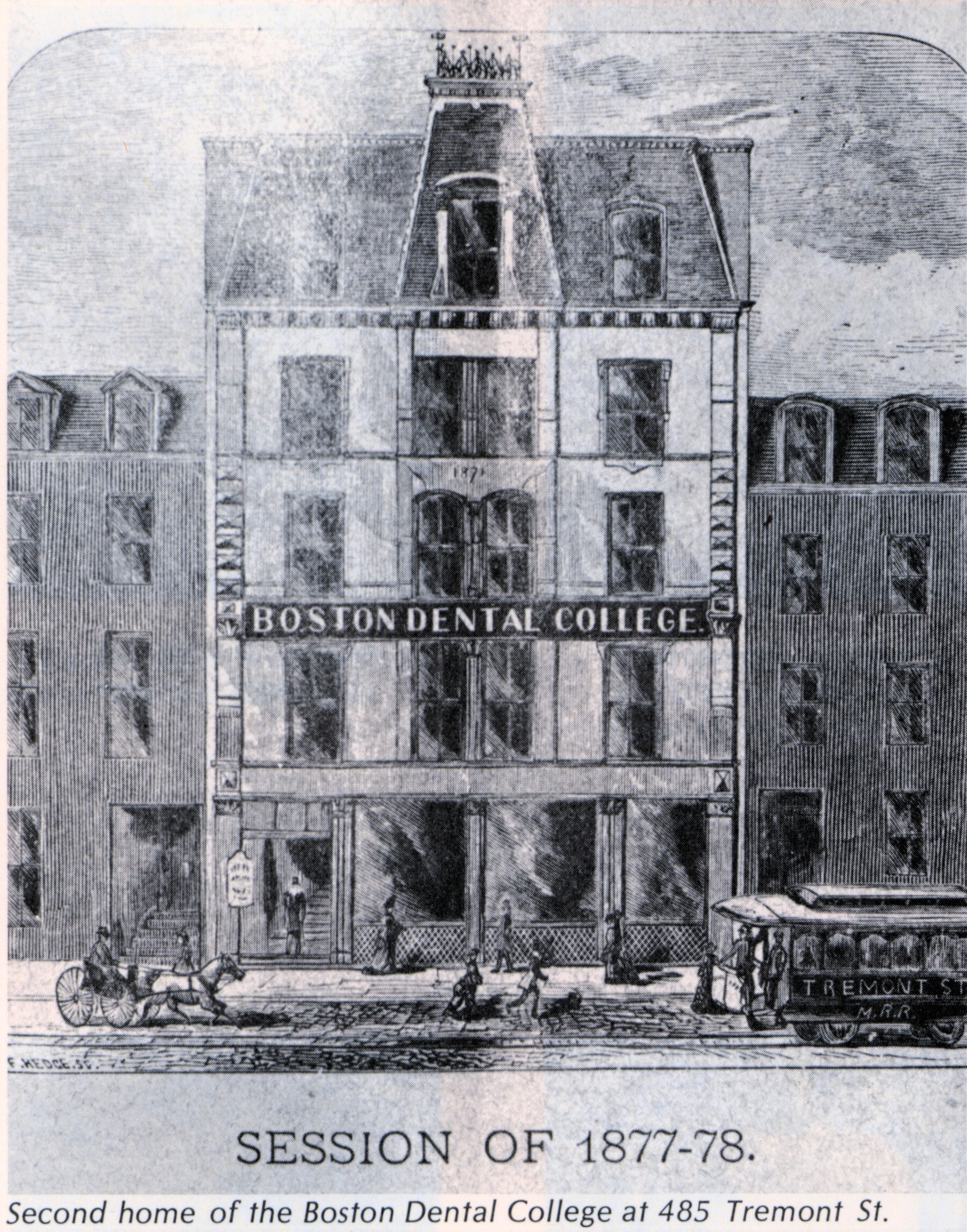 With higher standards in place, institutions around Boston turned their attention to community care. In 1899, the legislature authorized a merger of the Boston Dental College with Tufts College, a private university founded in 1852. The Tufts College Dental School expanded its capacity for providing excellent education and clinical care; a challenge its faculty met by giving students hands-on experience in community clinics.

Faculty and students at the Tufts College Dental School engaged community health early on. In fact, overcrowding at the Boston Dental College Infirmary—where patients came for emergency care and routine exams—was a key factor in the decision to join the two institutions in a new building at 416 Huntington Avenue. Within a few years, the 160 students and 35 faculty members at Tufts Dental were performing some 24,000 treatments for patients each year. This translated to roughly four-fifths of all the free dental service delivered across Massachusetts.

Boston was growing rapidly. Even with a proliferation of private practices and new resources like the expanded Tufts Dental Infirmary, many of the city’s 670,000 people in 1910 lacked access to affordable dental care.

That year, another piece of legislation created the Forsyth Dental Infirmary for Children, a new philanthropic endeavor spearheaded by several heirs to a wealthy industrial manufacturing family. To honor the memory of their late brother James—who had explored the possibility of creating a dental hospital for Boston children towards the end of his life—John, Thomas, and Mary Forsyth funded an impressive white stone facility at 140 Fenway Street.

The Forsyth family also provided a $2 million endowment, dedicating the new building in November 1914. The infirmary had one goal: “to care for children with defective teeth, adenoids and diseased tonsils, so that when they reach[ed] the age of sixteen they [would] be in good physical condition.” Within a decade, Forsyth served some 150,000 children.

A ten-minute walk connected the Tufts College Dental School and the Forsyth Institute. Tufts supported the training and clinical work at the Institute from its inception. Given the ease of access, many Tufts students worked as Forsyth interns, while recent graduates contributed much of the infirmary’s professional care.

This symbiotic partnership inspired the two institutions to extend their collaboration even further. In the second decade of the twentieth century, they created a training program for dental hygienists—then a brand new profession. This development coincided with the release of the 1926 Gies Report, a Carnegie Foundation-sponsored study of dental education that called for higher standards at dental institutions and solidified dental medicine’s place within the broader system of healthcare.

When the Forsyth-Tufts Training School for Dental Hygienists (later, the Forsyth School of Dental Hygiene) opened in 1916, it joined two similar and recently-established programs in New York. The development of dental hygiene programs, with preventative medicine and regular cleanings, increased the overall dental health of many patients. It also brought more women into the field.

Although men dominated the dental profession throughout the twentieth century, women made inroads: in 1892, Dr. Mary Stillwell-Kuesel and twelve others founded the Women’s Dental Association of the U.S., and in 1921, another group of twelve women dentists founded the Federation of American Women Dentists (later, the American Association of Women Dentists) in Milwaukee, Wisconsin. Thirty years later, Dr. Helen E. Meyers became the first dental officer in the U.S. Army, and in 1977, Dr. Nancy Goorey became the first female president of the American Association of Dental Schools (later, the American Dental Education Association). Female dental enrollments grew slowly into the 1980s. By 1984, 23.8 percent of new dental students in the United States were women. Women’s dental enrollments increased dramatically as the twenty-first century approached. By 2010, women comprised over half of the entering dental student population in North America.

The Forsyth Institute continued to provide clinical care while giving practical experience to dentists-in-training. In 1950, the organization shifted its emphasis to research. While still operating what is now called the Forsyth School for Dental Hygiene and extending its research and teaching collaborations with TUSDM, Harvard, and other institutions, the Forsyth Institute has made a variety of major breakthroughs in dental science.

The Forsyth Institute and TUSDM are no longer neighbors, yet they continue as partners. For many people in and around Boston, vital community care—born from the fusing of two innovative and community-centered institutions a century ago—is still only a short trip away.